Did you enjoy the Sisters' Emmy-nominated informational video about palliative care? Here's some more history on Mother Angeline and the Carmelite connection to the SALT program. 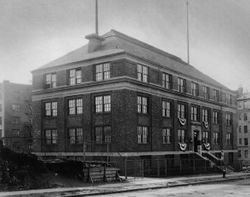 The Carmelite Sisters for the Aged and Infirm celebrated their 90th year of care for the elderly in 2019.  Their story begins with Brigid McCrory who was born on January 21, 1893 in Mountjoy, (now Brocagh), Northern Ireland.  When she was eight, her family (four children and her parents) moved to Scotland where her father found work at the Clydesdale Steel Works; a great number of Irish workers were already employed there.

It was in New York that Sister Marie Angeline developed her lifelong love of America and the American people.  Many of the residents of St. Augustine's Home were immigrants themselves but had adapted to the American way of life.  They contributed to the functioning of the home by using their talents since they were alone and poor but not as acutely ill as many of the residents in nursing homes today.

In September of 1919, at the age of 26, she was appointed by the Motherhouse of the Little Sisters in France to be a Councillor and to assist the local Superior in the running of the St. Augustine Home.    After nine years in New York, she returned to the Motherhouse in France to prepare for her perpetual vows which she pronounced on April 21, 1925.  She was then missioned to Pittsburgh in May of 1925 and was shortly named Assistant Superior of the home there.  Only a little more than a year later, Sister Marie Angeline was named Superior of Our Lady's Home in the Bronx and assumed this new role on October 7, 1926.  She was only 36 years of age at the time and took on the responsibility for 18 Little Sisters of the Poor and 230 elderly residents.

Stepping into her new role, she began to look for ways to serve the needs of her "old people". She saw an unmet need in America and that need was to care for the elderly who had a bit of money but had no one to look after them in their old age.  She also wished to make the accommodations of the residents more homelike, allow married couples to share a room, if able, and celebrate American holidays such as Thanksgiving.   In 1929 unable to do that as Little Sisters of the Poor,Mother Angeline and Sister Louise from Belgium, Sister Leonie from Boston, Sister Colette from Ireland, Sister Mary Teresa from Richmond, VA, and Sisters Alodie and Alexis both from Canada asked to be dispensed of their Vows as Little Sisters but not to leave the religious life.   Shortly less than a month later on September 3, 1929, the seven Sisters, through the efforts of Cardinal Hayes, moved into the old rectory of St. Elizabeth's Parish in New York City.  At St. Elizabeth's on October 29th, 1929, four days after the American Stock Market crashed, Mother and her six companion Sisters took in their first four elderly residents.

Mother Angeline felt the desire for herself and her six other Sisters to be affiliated with one of the great orders of the Church.  She enlisted the help of Very Reverend Lawrence Flanagan, O. Carm., Provincial of the New York Province of the Carmelites, who had been an early supporter of hers. On July 16, 1931, the feast of Our Lady of Mount Carmel, formal affiliation with the Carmelite Order was received and thus the Sisters became the first Congregation in America to be dedicated solely to the care of the aging in America.

From 1931 until she stepped down as Superior General in 1978, Mother Angeline oversaw the service of her Sisters in caring for the elderly.  During this period 50 homes were opened, and some continue to this day.  At the present time the Carmelite Sisters for the Aged and Infirm sponsor 13 facilities (nursing homes and or/independent or assisted living facilities), co-sponsor two and staff a further 3 belonging to various dioceses.  Mother Angeline died on her 91st birthday, January 21, 1984. In April 2007 almost 11,000 pages of documents were sent to the Congregation of Sacred Causes in Rome as part of the Cause for Beatification and Canonization of Mother Angeline.   In July 2012 Pope Benedict XVI declared Mother Angeline to be Venerable after Rome determined that she had lived a life of heroic virtue.  At present, the Carmelite Sisters for the Aged and Infirm are seeking the miracle that would enable Mother Angeline to be declared Blessed.

To further develop Mother Angeline’s vision of loving care practiced in the facilities, several programs were created to enhance the outreach of the Congregation: